According to Fullerton and Punj (1998), customer misbehaviour is a paradox of contemporary consumer culture manifested in the fact that its positive features trigger negative ones. Customer misbehaviour has become an intrinsic part of contemporary consumer behaviour and is sustained by the same factors that define the essence of consumer culture. This indicates that inappropriate customer behaviour is a result of the inadvertent stimulation of consumption ideologies by the marketing activities of companies (Fullerton and Punj, 2004).

Disapproved customer behaviour is known by various terminology in the literature, such as Jaycustomers, Aberrant consumer behaviour, Consumer misbehaviour, Deviant consumer behaviour, Opportunistic consumer behaviour, Unethical consumer behaviour), Customer dysfunctional behaviour or Pathological consumer behaviour (Smyczek, Grybś-Kabocik, Matysiewicz, & Tetla, 2017). A review of their definition reveals that the authors highlight different aspects of such behaviour and use issues related to ethics, pathology or deviancy of clients in their definitions (Smyczek et al., 2017). A survey of the definitions of the terms indicated makes it possible to conclude that there are no fundamental differences between the perceptions of such behaviour, and the nomenclature proposed can be regarded as similar and complementary (Błoński, 2021). For the purposes of this article, the author adopts the name dysfunctional customer behaviour as a neutral term compared with those mentioned above (Harris & Reynolds, 2003). Fisk et al. (2010), based on past research findings, have identified various categories of such behaviour. In addition to theft, vandalism or verbal abuse, they point out that such actions may have diverse motives (financial and non-financial), may be impulsive or planned, of varying frequency, as well as overt or covert in nature (Fisk et al., 2010, p. 420).

The aim of this article is to identify, based on publications in the field of 'dysfunctional customer behaviour’, the most frequently cited objects that are important to the researchers citing them, as well as to introduce the topics and their relationships that represent the conceptual space of 'dysfunctional customer behaviour’. The indicated objective will be realised on the basis of selected bibliometric analyses. The selected analyses (citation analysis, co-citation analysis and word co-occurrence analysis) are performed on the basis of data obtained from the Web of Science (WoS) and Scopus1 databases.

Bibliometric analysis consists of the use of various data relating to scientific publications and the citations given in these publications, to assess the performance of scientific activity and observe the development of science. Appropriately conducted bibliometric research makes it possible to obtain a comprehensive overview; identify gaps in knowledge; find new ideas for research and locate one’s intended contribution to a particular field (Donthu, Kumar, Mukherjee, Pandey, & Lim, 2021, p. 285). The bibliometric analysis procedure can be structured as follows (Donthu et al., 2021, p. 291):

Among the techniques available, distinction can be made between review, evaluation and relational bibliometric analysis techniques. Review techniques include structured literature reviews and meta-analyses oriented towards generating knowledge through frequency analysis. Evaluative techniques can be used to identify qualitative and quantitative indicators of research and to compare the scientific contributions of other researchers. They also allow identification of the number of items published or the number of citations of individual publications, authors and journals. Relational techniques examine the relationships between data found in publications, for example, topics, methods, co-authorship. Among the relational techniques are analysis of co-citation, co-occurrence of words, co-authorship of publications, bibliographic links, clustering of co-citations or direct citations (Lenart-Gansiniec, 2021, pp. 174–175).

Most bibliometric research publications include an analysis of citations in a given research area. It is presented in the form of the most frequently cited studies, authors or journals in the area under study. This approach is based on the fact that citations are used to determine impact-if an article is frequently cited, it is considered important. This thesis is based on the assumption that authors cite papers that they consider important to their work (Zupic & Cater, 2015). Citations also reflect the degree of knowledge transfer and dissemination by other authors, representing other scientific centres (Ejdys, 2016). Citation analysis can provide information on the relative impact of publications; however, at the same time its downside is that it cannot identify networks of interconnections between scientists (Usdiken & Pasadeos, 1995).

Co-citation analysis allows the use of a number of co-citations to construct measures of similarity between documents, authors or journals. Co-citation is defined as the frequency with which two entities are cited together. The basic premise of co-citation analysis is that the more times two objects are cited together, the more likely their content is related. Depending on the unit, analysis can be carried out on co-citation of documents, authors or journals. It should be noted that co-citation is a dynamic measure. This is because the publication process is time-consuming, so the result of a co-citation analysis reflects the state of the field at a given point in the preparation of the publication, and not necessarily what it looks like at the time of analysis (Zupic & Cater, 2015).

Co-word analysis (Callon, Courtial, Turner, & Bauin, 1983) is a content analysis technique that uses words in documents to establish relationships and build a conceptual structure within a particular domain. The idea behind this method is that if words frequently co-occur in documents, it indicates that the concepts behind the words are closely related. This is a method that relies on the actual content of documents to construct a measure of similarity, while others link documents indirectly through citations or co-authorship. The analysis can be carried out at the level of various elements (areas) of the text: titles, abstracts, keywords, the actual text of the publication or on the basis of various combinations of these elements. The result of the analysis is a network of topics and their relationships, which represent the conceptual space of the domain.

The indicated analyses will be performed using the VOSviewer program (version 1.6.17), whose authors are Nees Jan van Eck and Ludo Waltman. The program is based on the visualisation of similarities (VOS) technique, where similarity between objects is used for visualisation (similar objects are located close to each other, and less similar objects are located away from each other) (van Eck & Waltman, 2007). The results of the analysis are presented in the form of a network, where each node represents an individual unit (e.g., article, author, country, institution, keyword, journal), whereby:

The analysis performed made it possible to distinguish the most frequently cited publications and thus the relative importance of a given article in the analysed area (see Figure 2 for details). These are as follows: 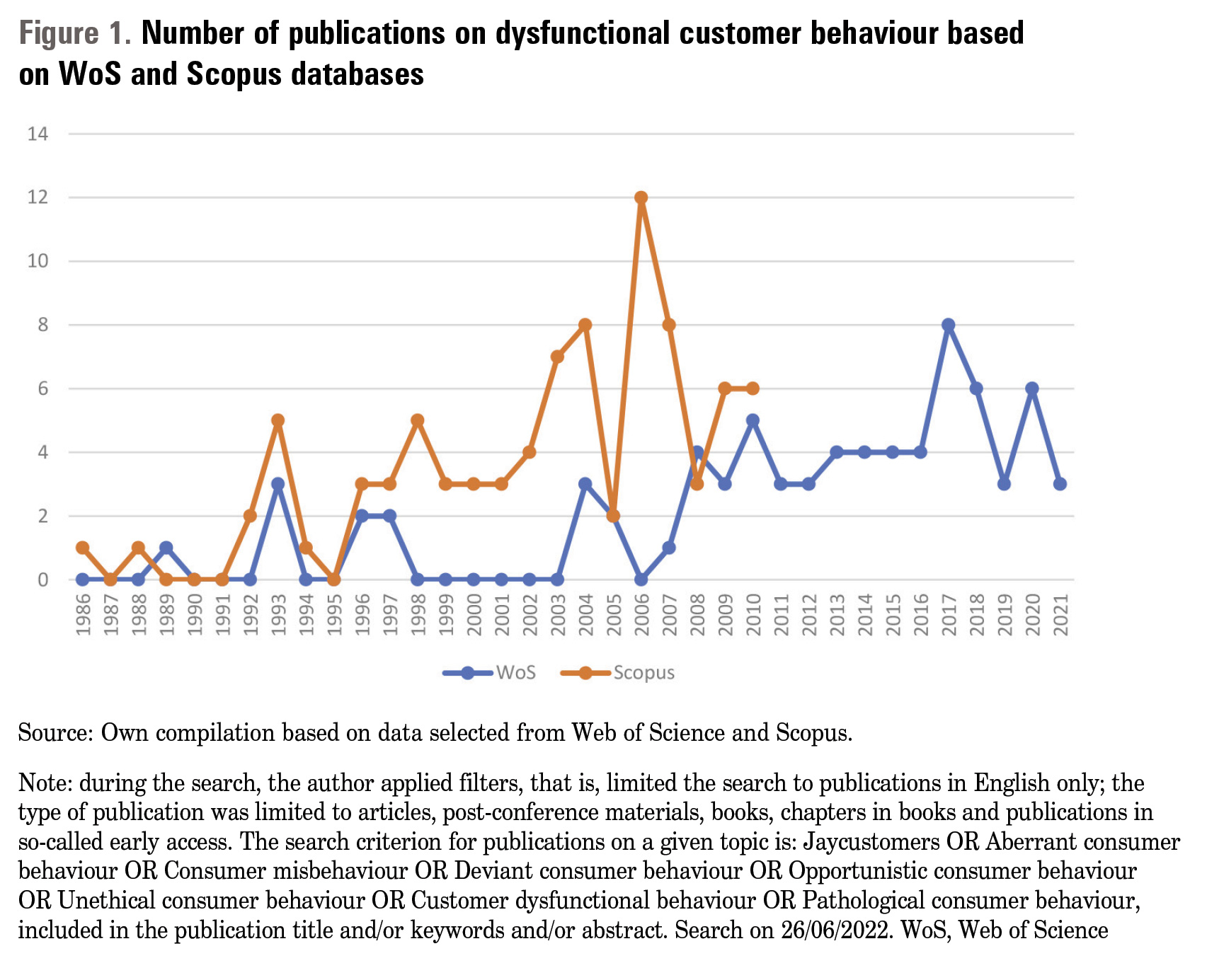 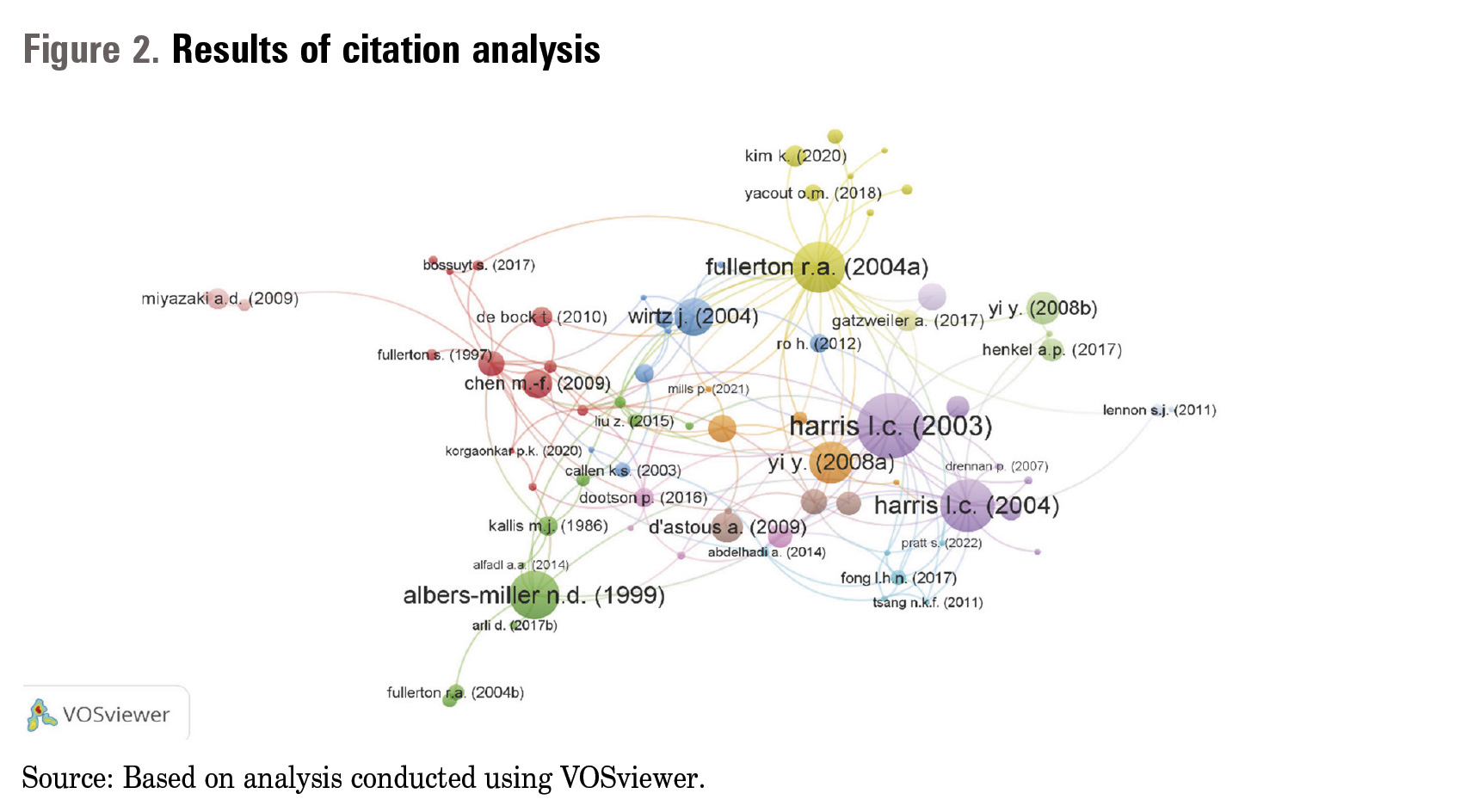 The first publication mentioned (Harris & Reynolds, 2003) provides a breakdown and description of the consequences borne by employees in direct contact with dysfunctional customers. The authors distinguished four sets of such consequences:

In the second publication, the same authors (Harris & Reynolds, 2004) focused on the motives of dysfunctional behaviour (financial or nonfinancial) and the actions taken by dysfunctional customers (overt or covert) which made it possible to create a typology of customer groups. These include Compensation letter writers; Undesirable customers; Property abusers; Service workers; Vindictive customers; Oral abusers; Physical abusers; and Sexual predators. The third most frequently cited position is Fullerton and Punj (2004). In this article, the authors presented a classification of bad customer behaviour. They distinguished the following behaviours:

The last article (Albers-Miller, 1999), contains the results of a study on the reasons for consumers’ voluntary purchases of products that are stolen, contraband or counterfeit. The results of the study allowed the authors to conclude as follows:

If during the citation analysis, in addition to the year of citing publication, we include the year of the cited publication, it will enable us to determine the changing position of individual articles over time. The indicated items were mainly cited in the first decade of the 21st century, now there are more and more items published in the second decade of this century. In addition, analysis of the citation age reveals the time it takes for publications to find their way into the circulation of scientific information3 (Figure 3). 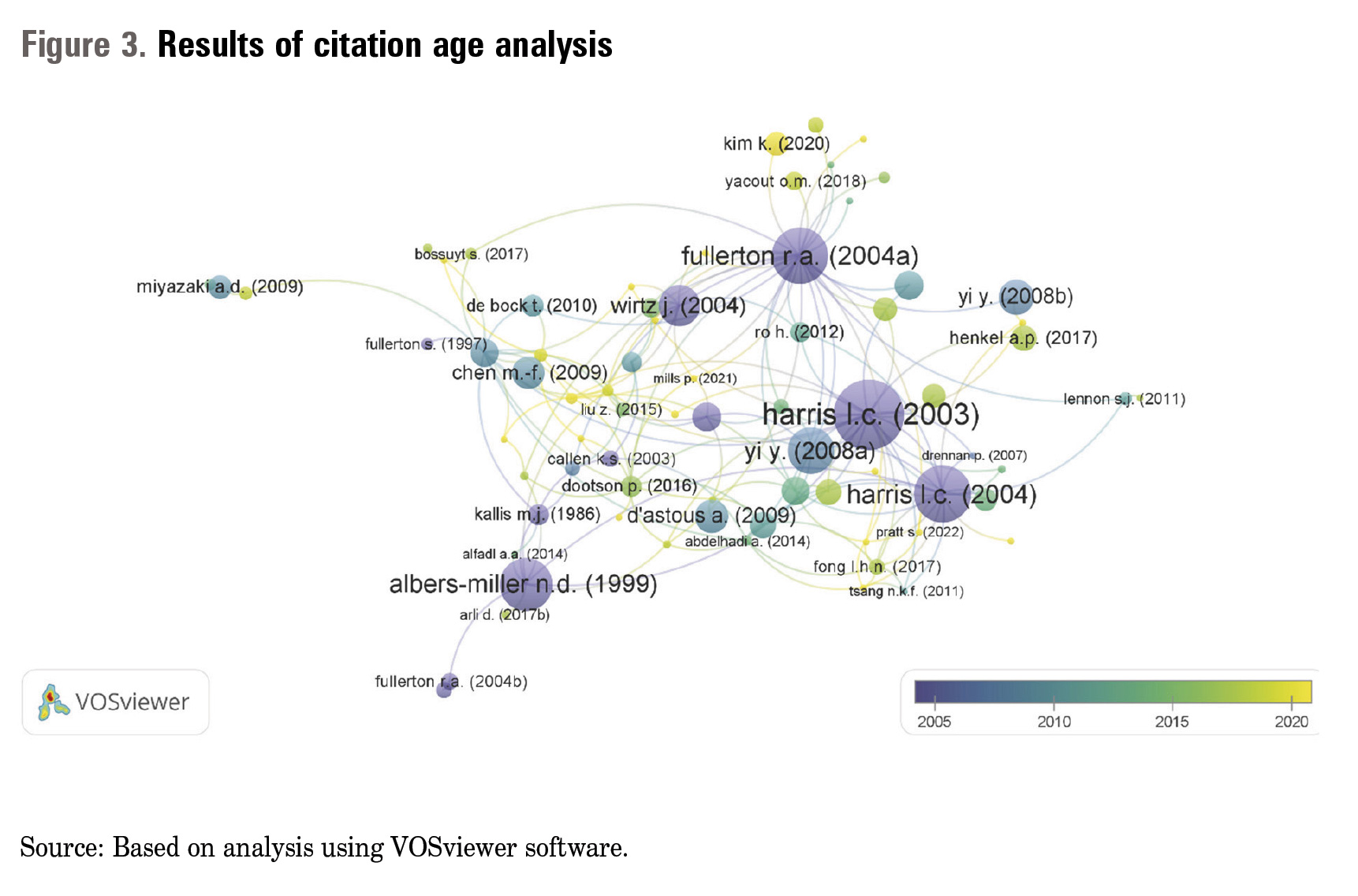 The results obtained in this area indicate that a minimum of a year or more elapses between publication and the appearance of citations, which is a consequence of the narrow subject matter covered by a small number of authors. 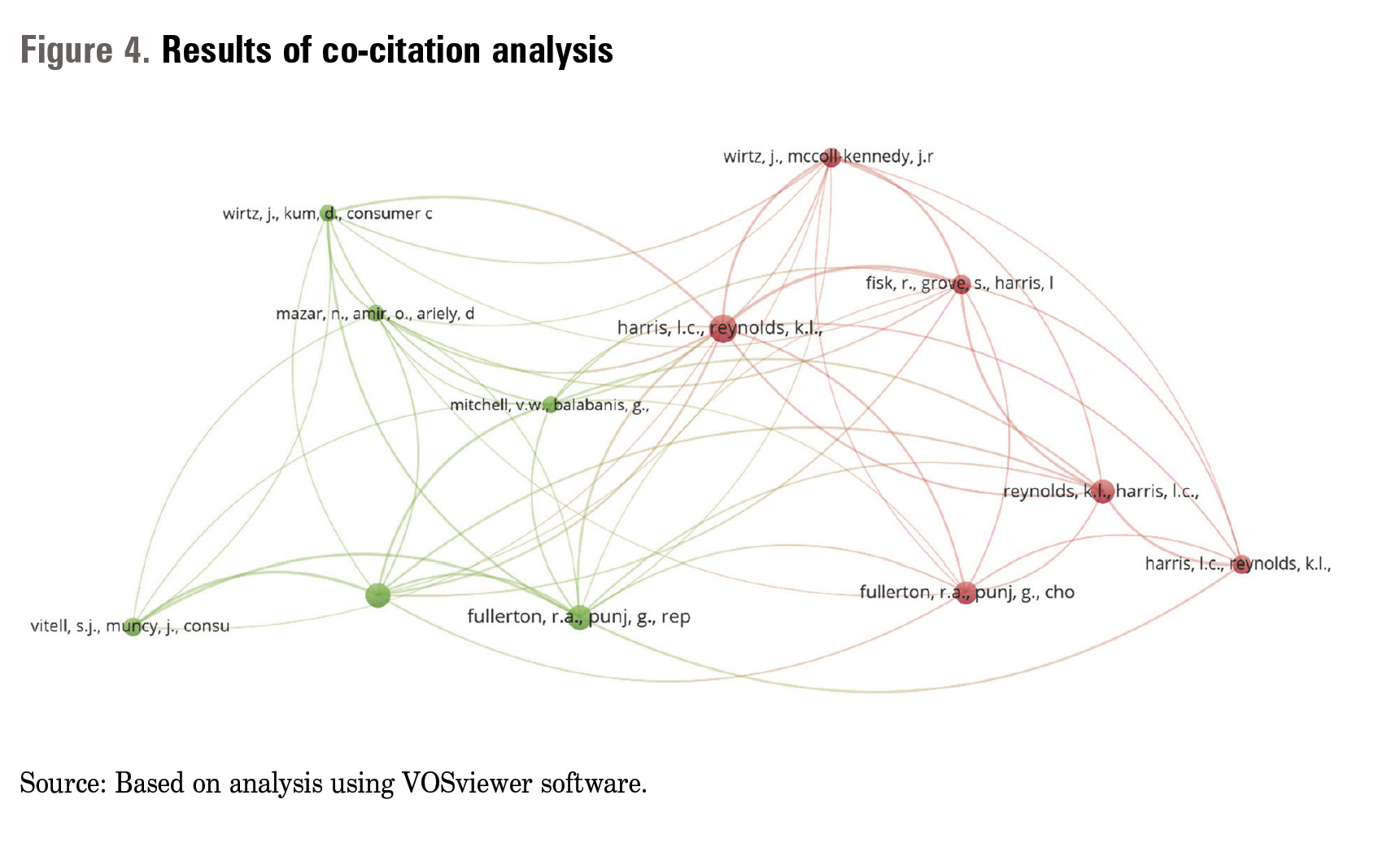 The result of the analysis is essentially a confirmation of the citation results presented earlier. As a general rule of thumb, two highly co-cited papers are also highly cited individually (Jarneving, 2005). This makes it possible to identify publications (selected using co-citation thresholds) considered as important by the researchers citing them (Zupic & Cater, 2015). In the case of the topic of dysfunctional customer behaviour, 12 such items can be identified. The names of authors and titles of these
publications by year of publication are presented in Table 1. 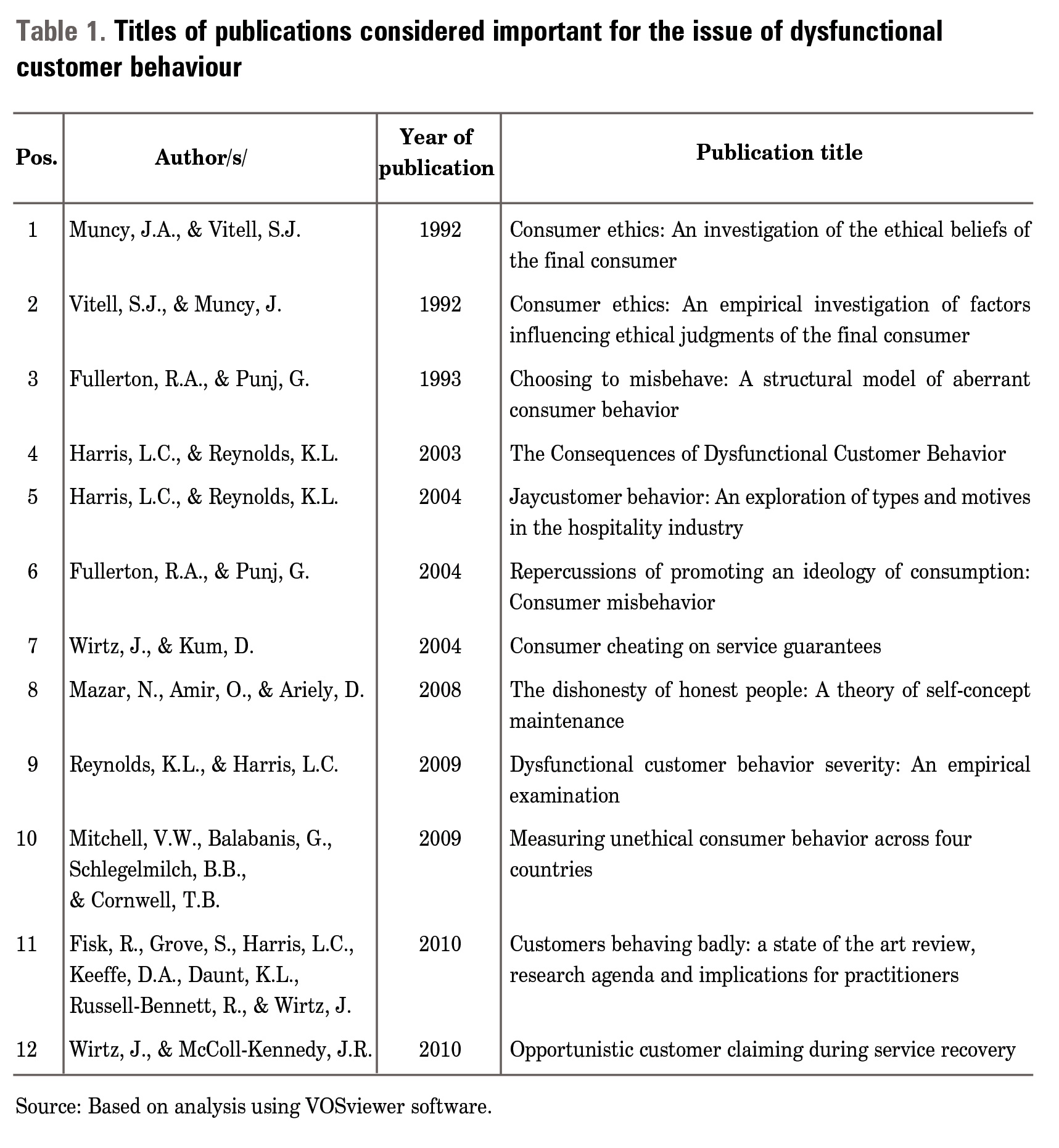 The final analysis of co-occurrence of words carried out and the attempt to identify clusters allowed us to tentatively identify nine clusters relating to the topic of dysfunctional customer behaviour. The sub-areas that emerged are related to the various concepts presented above that relate to the phenomenon under analysis as well as the issue of consumer behaviour and ethics (Figure 5). 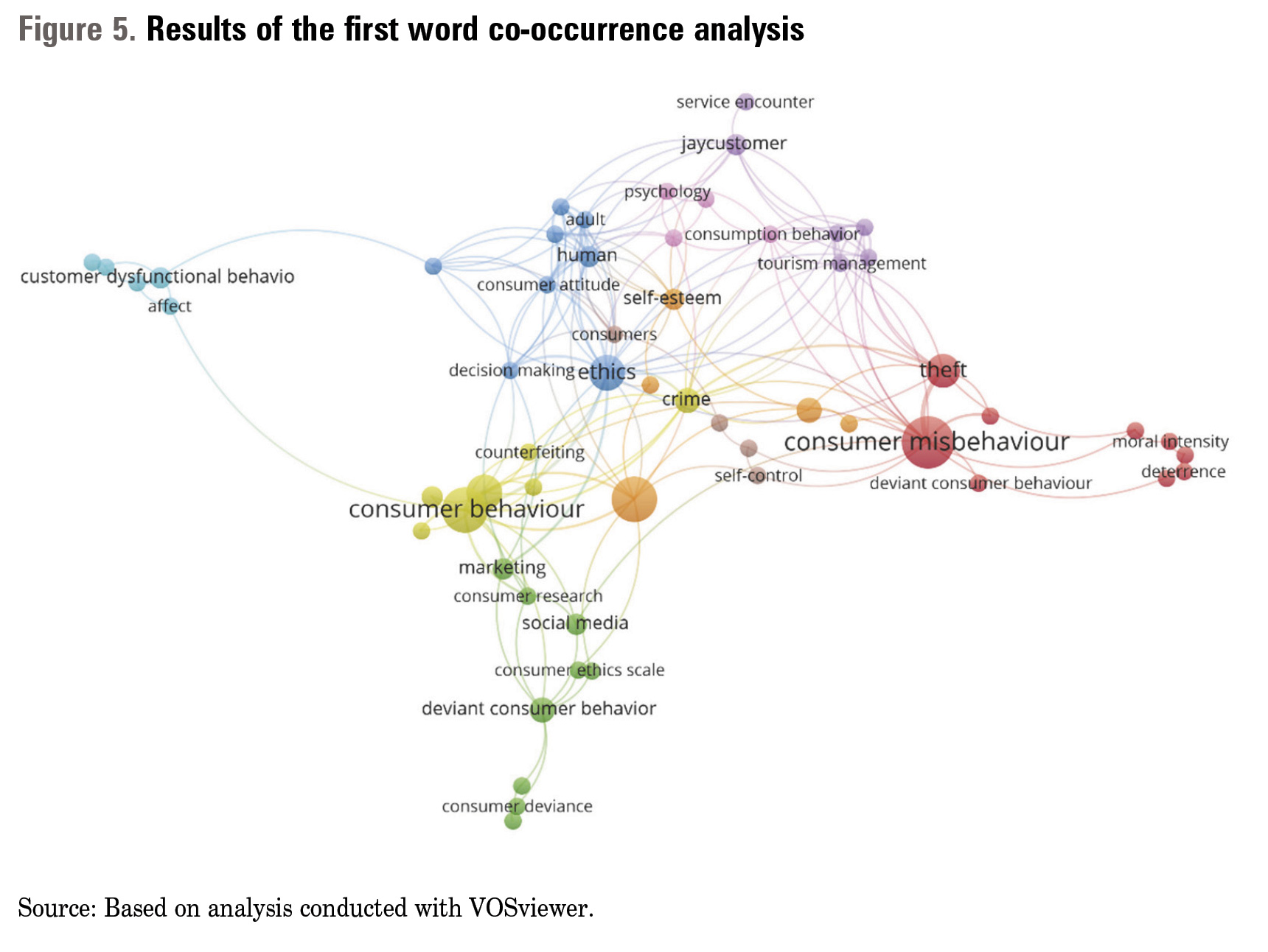 Therefore, a correction was made further and all terms referring to the analysed behaviours were replaced with one, that is, dysfunctional customer behaviour. This resulted in a network of relationships, where the essential nodes are dysfunctional customer behaviour, consumer
behaviour, ethics, crime and theft as one of the symptoms of the analysed behaviours4 (Figure 6). 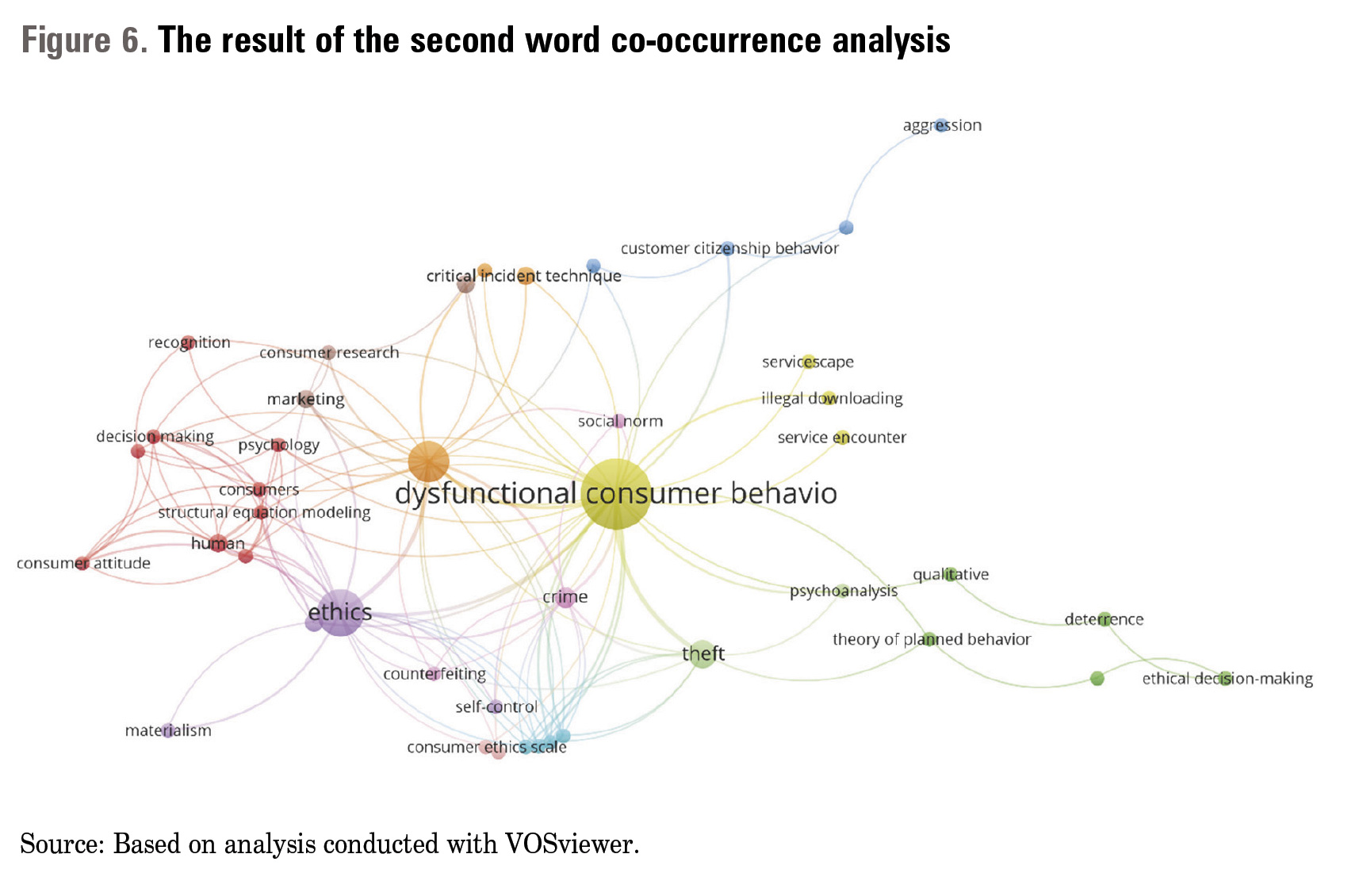 Market transformations occur not only under the influence of changes in the environment, that is, among the players and things that make up a given market, but also under the influence of the flow of time. It causes evolutionary or revolutionary changes in customer behaviour. Such changes can take a desirable, positive form and be accepted by other market participants. The market also reveals changes that are contrary to accepted social norms, which are the result not only of changes in the market but also of the individual characteristics of customers. Such changes are variously defined by authors interested in this area of customer behaviour. For the purposes of the above publication, they have been referred to as 'dysfunctional customer behaviour’. The first publications in this area appeared in the second half of the 1980s. As time went by, more researchers presented their publications on this issue.

The identified collection of publications in this area allowed conducting selected bibliometric analyses. The presented results of the analyses made it possible to identify the group of most frequently cited publications, to isolate those publications that are important to the citing researchers, and to approximate the topics and their relationships that represent the conceptual space of 'dysfunctional customer behaviour.’ The author is aware of the existing limitations of the analysis carried out. They are mainly due to the following: restriction to the selected bibliographic databases (WoS and SCOPUS) and the linguistic limitation of searching the databases only for English-language texts. At a further stage of the research process, the bibliometric analysis should be supplemented by a qualitative and substantive evaluation of the content of articles of interest to the researcher.

1 The article is part of a broader research project in which members of the research team, which includes the author, aimed to study dysfunctional human behavior as a consumer and employee.
2 According to van Eck, Waltman (2010), VOSviewer should be used to visualize data volumes consisting of a minimum of 100 objects.
3 Citation age is calculated by comparing the date of the citing publication with the date of the cited publication.
In other words, it is the difference between the year of the citing publication and the year of the cited publication.
4 The set of dysfunctional customer behaviors most often includes theft, lying, forging documents, vulgar or aggressive behavior toward salespeople or other customers, or abuse of alcohol or drug substances.

Krzysztof Błoński — Associate professor at Marketing Department in the University of Szczecin, Poland. His research interests focus on marketing, consumer behaviour and the use of quantitative, qualitative and mixed-method research in the area of management.