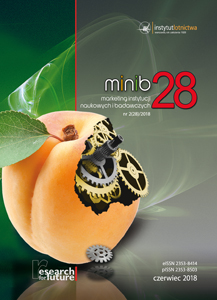 The article is a theoretical-empirical work in its character. It presents issues associated with the significance of associations with the university as an employer among employees representing the external labour market. In the theoretical part the method of cognitive-critical analysis of world literature on the subject from the area of image management, marketing and human resource management is used. What is emphasized on the basis of the results of the analysis is the key role of associations with the employer that the potential employees have in the process of building the image of an employer as an excellent workplace. It is also emphasized that deliberations from this area presented in literature on the subject don’t refer to the university as an employer. Thus, we can say that there is a cognitive and research gap in this area. That’s why this article is an attempt to achieve, among others, such goals as identification of the associations of young potential employees with the university as an employer, defining the changes taking place in them and grouping them. For the empirical part of the research the method of questionnaire survey (collecting primary data) and the method of quantitative analysis (including the analysis of average assessments and comparative analysis) were used. The obtained results show slight deterioration of associations with the university as an employer in 2018, compared to 2016. This is shown by, among others, growth of the values of average assessments in case of 5 negative associations and at the same time a noticeable drop of the values of average assessments in the group of positive associations.

The article is empirical-theoretical in character. In its theoretical part on the basis of the results of a cognitive-critical analysis of world literature on the subject the significance of the associations of potential employees with the future employer is presented. Particular attention is paid to their major role with regard to the university as an employer, which should strive to shape its image among young participants of the external labour market based on building positive associations. Associations with such a characteristic employer as a university may be diversified depending on the demographic criteria. The fact that there is a shortage of research on this area is emphasized. This suggests there is a cognitive and research gap in this area. Thus, the article strives to, among others, identify associations with the university as a future workplace among women and among men and to compare their associations. 2 research hypotheses were formulated. In the process of carrying out research goals and testing both hypotheses empirical research was conducted. It covered the representatives of the group of young potential employees. The method of questionnaire survey was used to collect primary data. The collected data were subject to quantitative analysis. Among the methods used for the quantitative analysis were the methods of statistical analysis, including factor analysis and Kruskal-Wallis test. The results of conducted analysis suggest that the associations of the surveyed women and men differed. Statistically significant differences were observed above all in case of associations with positive undertones.

In the era of innovation revolution it is justified to pursue rational policy of innovation on the level of country, region and company. Innovations have become a basic development factor for business entities, the growth of their competitiveness, improvement of their position on the market, growth of economic efficiency etc. The assumptions of such policy should be based on a precise diagnosis of the existing state in the area of innovative activity. This article tries to carry out such a diagnosis by looking for answers to the following questions:

1. Did companies functioning in Member States of the European Union conduct rational policy in the area of innovative activity?
2. Did the implemented innovations contribute to the achievement of particular revenues?
3. What share of the generated revenues was invested by companies in innovative activity?

To answer these questions the method of statistical-comparative analysis of empirical research conducted by TNS Political & Social in 28 Member States of the European Union, Switzerland and USA was used. The survey was conducted in February 2016 on a sample of 14,117 companies in the area of trends in business innovation in the EU.

Ethos of science and the approach to promotion in science

What counts the most in the world of science is the quality of research work. A scientist whose work is scientifically perfect can gain recognition and become an authority in his field. To achieve full success a researcher has to take efficient measures in the area of personal marketing. The goal of this activity is creating and maintaining the desired attitudes and/or behaviours towards a scientist and building a positive own scientific image. However, a scientist engaging in self-promotion may attract the odium of the academic community. That’s why what determines activity in this area is how a researcher perceives the significance of activities from the field of personal marketing for achieving success in science. The approach to this subject may differ according to the system of values and norms regarded as binding for the people of science. The goal of the article is investigating the differences in the perception of activities from the area of personal marketing occurring among scientists identifying themselves with different scientific ethoses.

In order to achieve the adopted goal two research scales were used to divide the investigated community of scientists into four groups. Three out of these four groups followed either academic, industrial, or post-academic ethos of science and members of the fourth group didn’t identify themselves with any of the mentioned systems of values. In groups defined this way the perception of the significance of three potential success factors in science was investigated: popularization of research results, recognisability in the scientific community and recognisability outside the scientific community. The analyses were carried out on the basis of data obtained from 800 scientists who participated in the nation-wide survey conducted by means of the CAPI method by National Information Processing Institute at the end of 2015 and the beginning of 2016.

According to the scientists who took part in the survey, it is necessary to pay most attention to the popularization of research results and the least attention to activities giving recognisability outside the scientific community. Researchers who follow the post-academic ethos of science, which is based on the values of both academic and industrial science, attach comparably high importance to all three analysed aspects of self-promotion. At the other end of the spectrum there are scientists identifying themselves with Merton’s ethos of academic science. They regard the significance of building recognisability in the non-scientific community as particularly low. At the same time the representatives of Ziman’s values of industrial science, as intuition suggests, less than other groups appreciate the will to achieve recognisability in the scientific community. Thus, we can risk the statement that scientists appreciating the ethos of post-academic science display the highest marketing awareness and the representatives of the ethos of academic science display the lowest marketing awareness.

The problem of cooperation between science and business

The indicator of innovativeness of the Polish economy is among the lowest indicators in Europe. Research has shown that one of the reasons for this is low level of cooperation between science and business.

Problems of cooperation of the sector of science and the sector of companies result to a large extent from a big difference in the organizational culture of the two communities. What distinguishes the two communities from each other is the perception of business issues, form of communication, the approach to solving disputable issues, approach to temporal and financial limitations, or even the way of building interpersonal relations. Changing this state of affairs requires time and patience, working out methods of building cooperation and learning from each other.

In the article a diagnosis of chosen reasons for the unsatisfactory level of cooperation between science and business has been carried out and recommendations concerning methods of changing this situation have been presented.

The issue of integrated marketing communication in contemporary research is clearly evolving along with the development of markets, their participants and technologies. The goals of this article are: first of all, showing the evolution of models of integrated marketing communication (IMC) in light of the current research, second thing is analysing the configuration of various IMC tools (that is, traditional and Internet tools) which constitute a level of operationalization of IMC models and the third thing formulating implications for managers in the area of company and brand activities. The article is based on secondary sources related to research (scientific magazines) and empirical sources (case study). The effect of these deliberations is showing the strategic dimension of integrated marketing communication in a company and a proposal of its operationalization in form of the 360-degree communication model.